Paul got offered a four-month contract porting from Los Angeles biweekly to Hawaii from Princess cruises and Paul agreed to do it.

Kill Hannah is on a small touring break due to lead vocalist Mat Devine being cast in the New York, NY Broadway production of SPIDERMAN Turn Off the Dark featuring all original music by Bono and The Edge……….that’s insane!

Good for Mat, bad for Paul as he doesn’t want to sit around Chicago and wait for another tour, might as well gig while waiting.

A word from Paul: 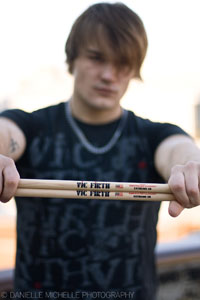 Dude, I’ll be in Hawaii……………..sweet. Goodbye Chicago winter and hello warm weather in Hawaii/Los Angeles as the ship ports from Los Angeles biweekly to Hawaii. It’s an all expenses paid gig plus salary, that’s like a paid vacation if you ask me. I get to play different styles of music night to night and the rest of the time will be devoted to practicing drums, re-evaluating my reading chops/jazz repertoire, and focusing more on my skype drum students.

STUDY WITH PAUL VIA SKYPE

Skype is a great way for students to keep in touch and stay motivated while I’m away but other people are encouraged to study with me even if it is just via skype! My best lessons while studying at Berklee in the past were always the ones where I just got to ask questions and talk shop about drumming. Simply chatting with my favorite teachers kept me motivated because it was inspiring to know that they are all human, well most of them anyway. haha jk.

Here’s a little drum trailer of Paul’s humorous/adventurous day in the life at rehearsal w/ Kill Hannah and a few words from Paul about his new side gig out of Los Angeles/Hawaii during KH’s hiatus. Keep up with Paul and study drums with him by visiting www.paulwandtke.com.

Two promotional photo shoots were taken in preparation for 2011:
2011 Chicago rooftop shoot courtesy of Danielle Michelle Photography. Special thanks to Greg C. of KH for letting us borrow his roof. 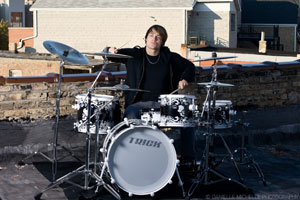 Also, if you haven’t caught Paul out on the road this year, check out his drum trailer video midst the Smashing Pumpkins tour w/ Kill Hannah featured on his Vic Firth artist page.